A national cross-sectional survey of the attitudes, skills and use of evidence-based practice amongst Spanish osteopaths

Background: Although evidence-based practice (EBP) is largely supported across healthcare professions, its implementation in manual therapy professions such as osteopathy remains limited and debated. There is currently little knowledge of how Spanish osteopaths relate to EBP.
Objectives: The main aim of this study was to investigate the attitudes, skills and use of EBP among Spanish osteopaths. A secondary aim was to identify barriers and facilitators for the adoption of EBP in the Spanish osteopathic context.
Methods: National cross-sectional survey of Spanish osteopaths registered and non-registered to an osteopathic association in Spain. Eligible participants were invited by a range of recruitment strategies including email and social media campaigns to complete the Spanish-translated Evidence-Based practice Attitude and utilization Survey (EBASE) anonymously online.
Results: A total of 567 osteopaths completed the survey which represents an approximate response rate of 9%. Participant’s attitudes toward EBP were largely positive. Most respondents agreed or strongly agreed that EBP was necessary in the practice of osteopathy (89.6%) and that professional literature and research findings were useful to their day-to-day practice (88.9%). Levels of perceived skill in EBP were reported as low to moderate with lowest levels for items related to ‘research conduct’. Except reading/reviewing professional literature and using online search engines to find practice-related literature, participant engagement in all other EBP-related activities was generally infrequent. The perceived proportion of clinical practice that was based on clinical research evidence was reported to be very small. Main barriers to EBP uptake included a lack of clinical evidence in osteopathy and insufficient skills for applying research findings. Main facilitators of EBP uptake included access to full-text articles, internet at the workplace and online databases.
Conclusions: Spanish osteopaths were largely supportive of evidence-based practice, had low to moderate skills in EBP and engaged in EBP activities infrequently. Formal regulation of the profession in Spain and the inclusion of osteopathic programs into the university sector would potentially improve EBP skills and use. 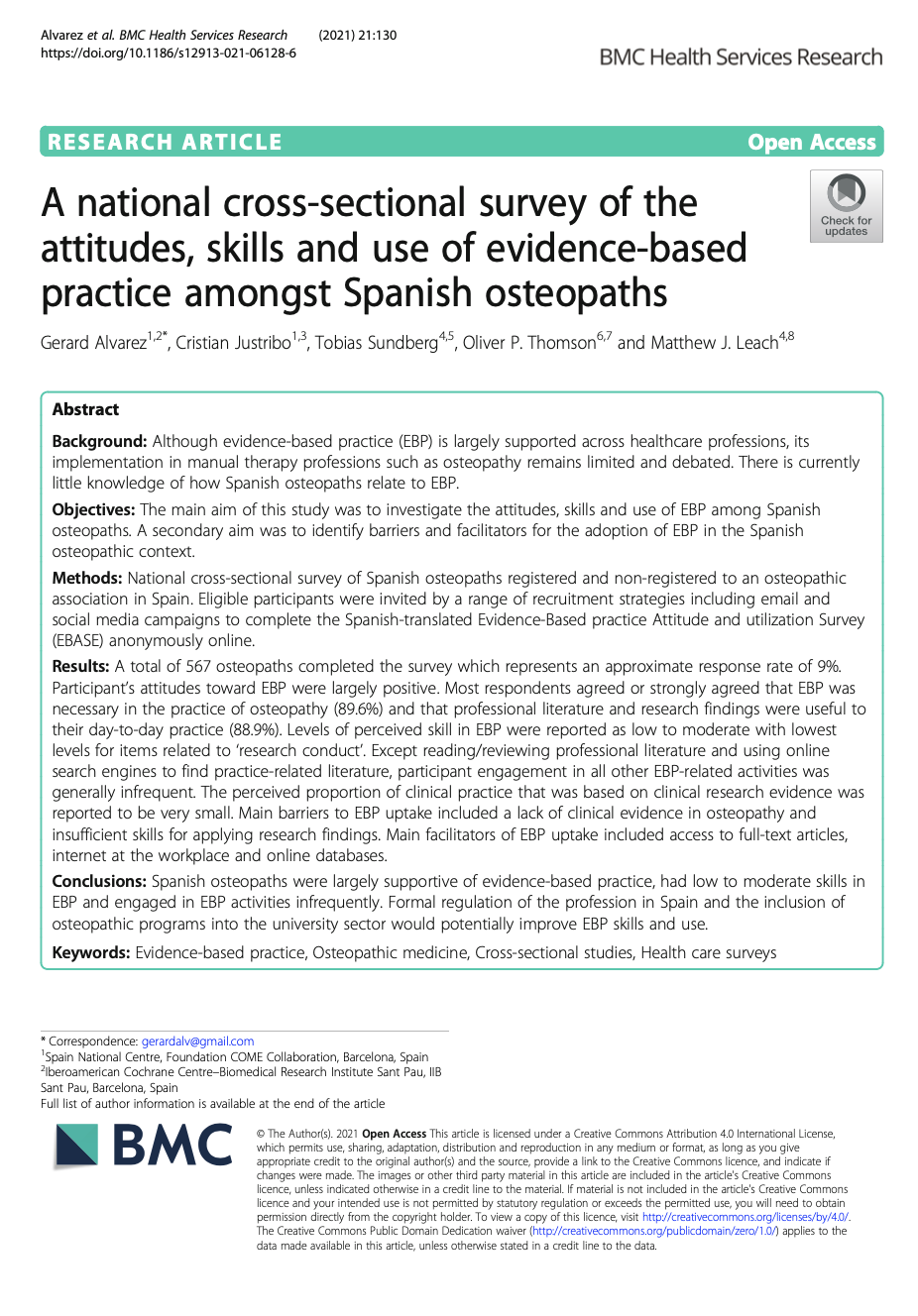 Sample size, study length, and inadequate controls were the most common self-acknowledged limitations in manual therapy trials: A methodological review

Objectives
The aim of this study was to quantify and analyze the presence and type of self-acknowledged limitations (SALs) in a sample of manual therapy (MT) randomized controlled trials.
Study Design and Setting
We randomly selected 120 MT trials. We extracted data related to SALs from the original reports and classified them into 12 categories. After data extraction, specific limitations within each category were identified. A descriptive analysis was performed using frequencies and percentages for qualitative variables.
Results
The number of SALs per trial article ranged from 0 to 8, and more than two-thirds of trials acknowledged at least two different limitations. Despite its small proportion, 9% of trials did not report SALs. The most common limitation declared, in almost half of our sample, related to sample size (47.5%) followed by limitations related to study length and follow-up (33.3%) and inadequate controls (32.5%).
Conclusion
Our results indicate that at least two different limitations are consistently acknowledged in MT trial reports, the most common being those related to sample size, study length, follow-up, and inadequate controls. Analysis of the reasons behind the SALs gives some insights about the main difficulties in conducting research in this field and may help develop strategies to improve future research. 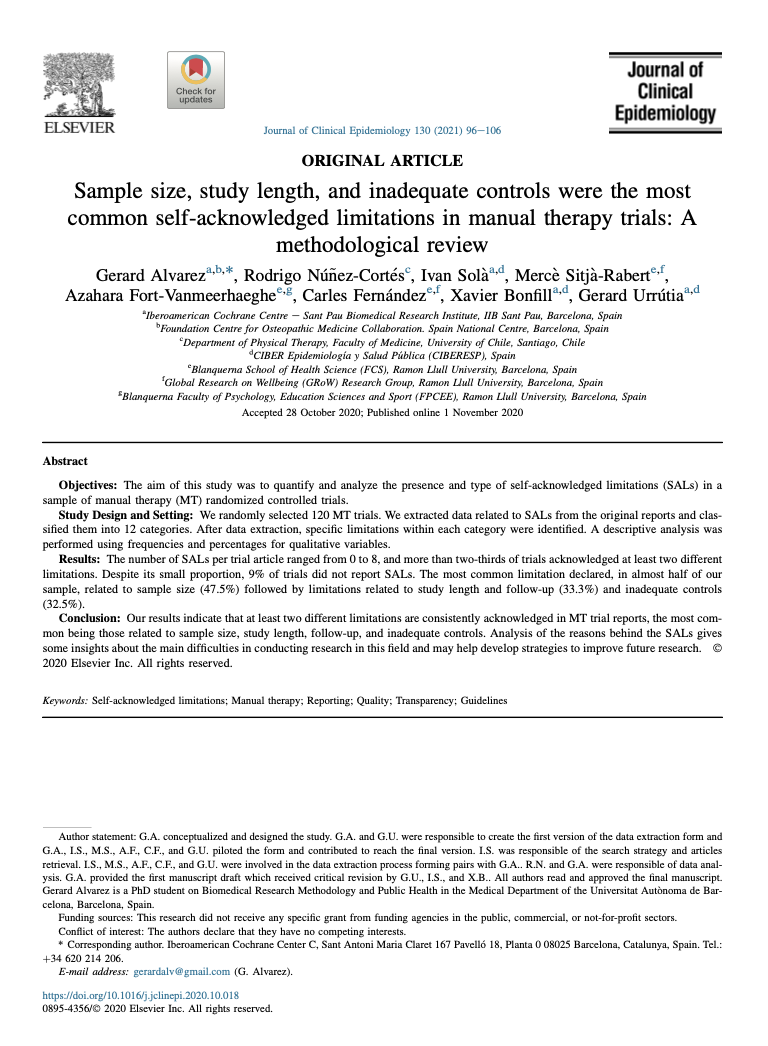 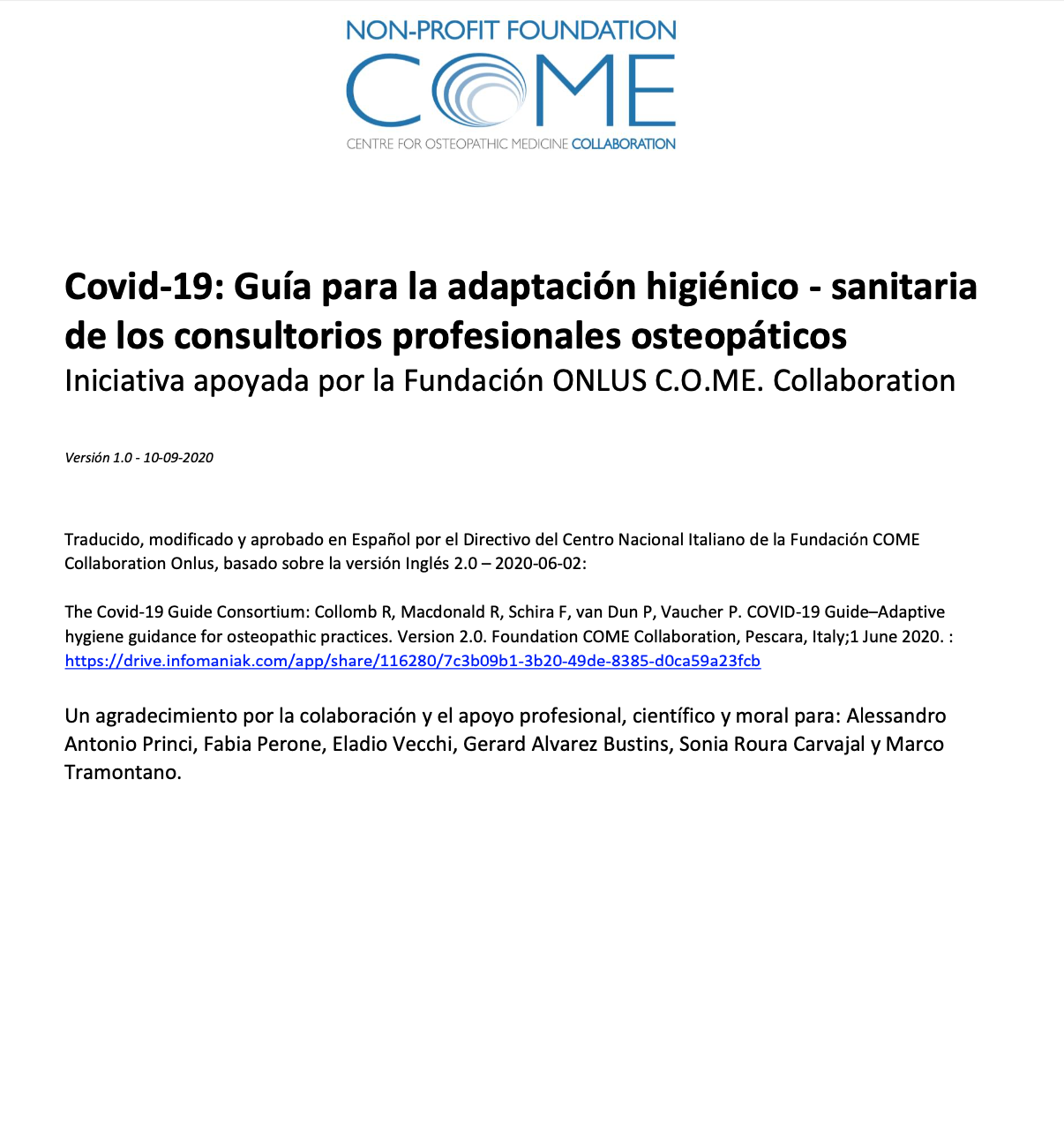 Background: Despite the growth of the osteopathic profession in Spain in the last few years, reliable information regarding professional profile and prevalence is still lacking. The Osteopathic Practitioners Estimates and RAtes (OPERA) project was developed as a European-based survey dedicated to profiling the osteopathic profession across Europe. The present study aims to describe the characteristics of osteopathic practitioners, their professional profile and the features of their clinical practice.
Methods: A voluntary, validated online-based survey was distributed across Spain between January and May 2018. The survey, composed of 54 questions and 5 sections, was formally translated from English to Spanish and adapted from the original version. Because there is not a unique representative osteopathic professional body in Spain, a dedicated website was created for this study, and participation was encouraged through both specific agreements with national registers/associations and an e-based campaign.
Results: A total of 517 osteopaths participated in the study, of which 310 were male (60%). The majority of respondents were aged between 30–39 years (53%) and 98% had an academic degree, mainly in physiotherapy. Eighty-five per cent of the respondents completed a minimum of four-year part-time course in osteopathy. Eighty-nine per cent of the participants were self-employed. Fifty-eight per cent of them own their clinic, and 40% declared to work as a sole practitioner. Thirty-one per cent see an average of 21 to 30 patients per week for 46–60 minutes each. The most commonly used diagnostic techniques are movement assessment, palpation of structures/position and assessment of tenderness and trigger points. Regarding treatment modalities, articulatory/mobilisation techniques followed by visceral techniques and progressive inhibition of neuromuscular structures is often to always used. The majority of patients estimated by the respondents sought osteopathic treatment for musculoskeletal problems mainly localised on the lumbar and cervical region. The majority of respondents manifest a robust professional identity and a collective desire to be regulated as a healthcare profession.
Conclusions: This study represents the first published document to determine the characteristics of the osteopathic practitioners in Spain using large, national data. To date, it represents the most informative document related to the osteopathic community in Spain. It brings new information on where, how, and by whom osteopathy is practised in the country. The information provided could potentially influence the development of the profession in Spain. 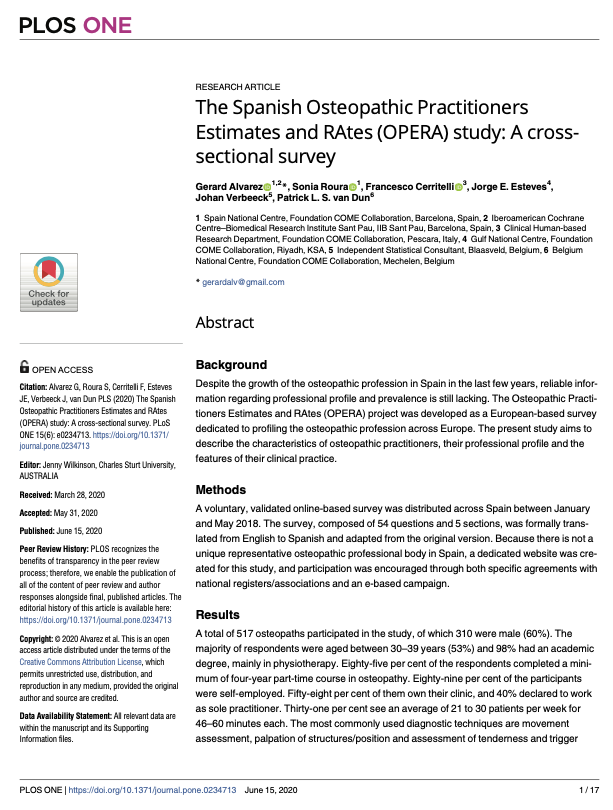 Professional identity in the evolution of osteopathic models: Response to Esteves et al.

Abstract
After several publications calling for changes within our profession, the recent editorial published by Esteves et al. "Models and theoretical frameworks for osteopathic care - A critical view and call for updates and research" represents a reflection worth considering for the entire osteopathic community. Osteopathy only can progress through a self-reflecting process that generates an honest debate on the strengths and shortcomings of the profession. While we support the proposal made by the authors related to the generation of new frameworks and models, in the present response we focus on some aspects that could explain why many osteopaths remain stuck in outdated models, theories and practices. We argue that these aspects constitute a barrier to close the gap between scientists, clinicians and educators and prevent the evolution towards new working models. In the core of our argument, there is the concept of “professional identity” as one of the most determining factors to explain the “osteopathic reluctance” to overcome or evolve away from old beliefs, models and traditions. In fact, the relationship between osteopathic models and professional identity is already mentioned in the first and last sentence of Esteves et al. paper. 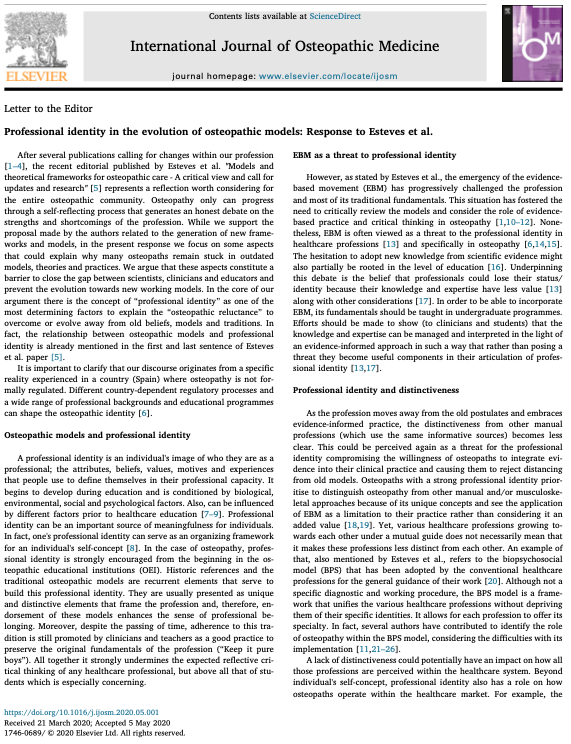 Beliefs about chronic low back pain amongst osteopaths registered in Spain: A cross-sectional survey

Abstract
Background: Healthcare providers' (HCPs) attitudes and beliefs might influence patients’ attitudes and beliefs as well as their management approach. It was hypothesised that osteopaths have a more biopsychosocial mindset towards chronic low back pain (CLBP) because of their holistic reasoning.
Objective: The primary aim of the study was to assess the beliefs of osteopaths registered in Spain about CLBP and the presence of kinesiophobic and fear-avoidance beliefs. The secondary aim was to compare these results with previous research and cut-off values.
Method: Members of the Spanish Federation of Osteopaths (FOE) were invited to participate in an online cross-sectional survey based on three questionnaires: the Health Care providers Pain and Impairment Relationship Scale (HC-PAIRS), the Tampa Scale of Kinesiophobia 11-item version for healthcare providers (TSK(11)-HC) and the Fear Avoidance Beliefs Questionnaire for healthcare providers (FABQ-HC). The mean scores were calculated for each questionnaire and correlations were established to assess the strength of the associations between the different instruments. The results were compared to previous research with other HCPs and to cut-off scores where available.
Results: The response rate was 14.58% (n = 70). The mean score on the HC-PAIRS was 59.44 ± 12.19 [CI 95% 56.54–62.35] and there was a large variation in scores. On the TSK(11)-HC and FABQ-HC 28.6% and 25.7% of the sample respectively reached the cut-off scores.
Conclusion: The study suggests that the Spanish osteopaths do not have a more biopsychosocial orientation towards the management of CLBP than other HCPs. Approximately a quarter of them hold kinesiophobic and fear-avoidance beliefs that might negatively influence their treatment approach.

Abstract
Objective: The aim of this review was to evaluate a selection of major reporting aspects in manual therapy (MT) trials, before and after the publication of the CONSORT extension for nonpharmacological trials (CONSORTnpt)
Study Design and Setting: We randomly selected 100 MT trials published between 2000 and 2015 and divided them into a pre- CONSORTnpt (n=50) and a post-CONSORTnpt (n=50) group. We extracted data on relevant issues of internal validity, reliability, and description of interventions. Two authors extracted data independently. Percentages were used for descriptive analyses, and Fisher’s exact test and the chi-square test were used for group comparisons.
Results: Six different types of MT interventions with up to 20 controls were analyzed. The most common populations/conditions studied were healthy subjects and subjects with lower back or neck pain. Over 70% of studies included multi-session interventions, and 42% of studies reported long-term followup. The only significant differences between groups were the inclusion of a flowchart diagram, the estimated effect size, precision descriptions, and the description of intervention procedures.
Conclusion: Our findings suggest that trials in MT show poor reporting even after the availability of standardized guidelines. ! 2020 Elsevier Inc. All rights reserved. 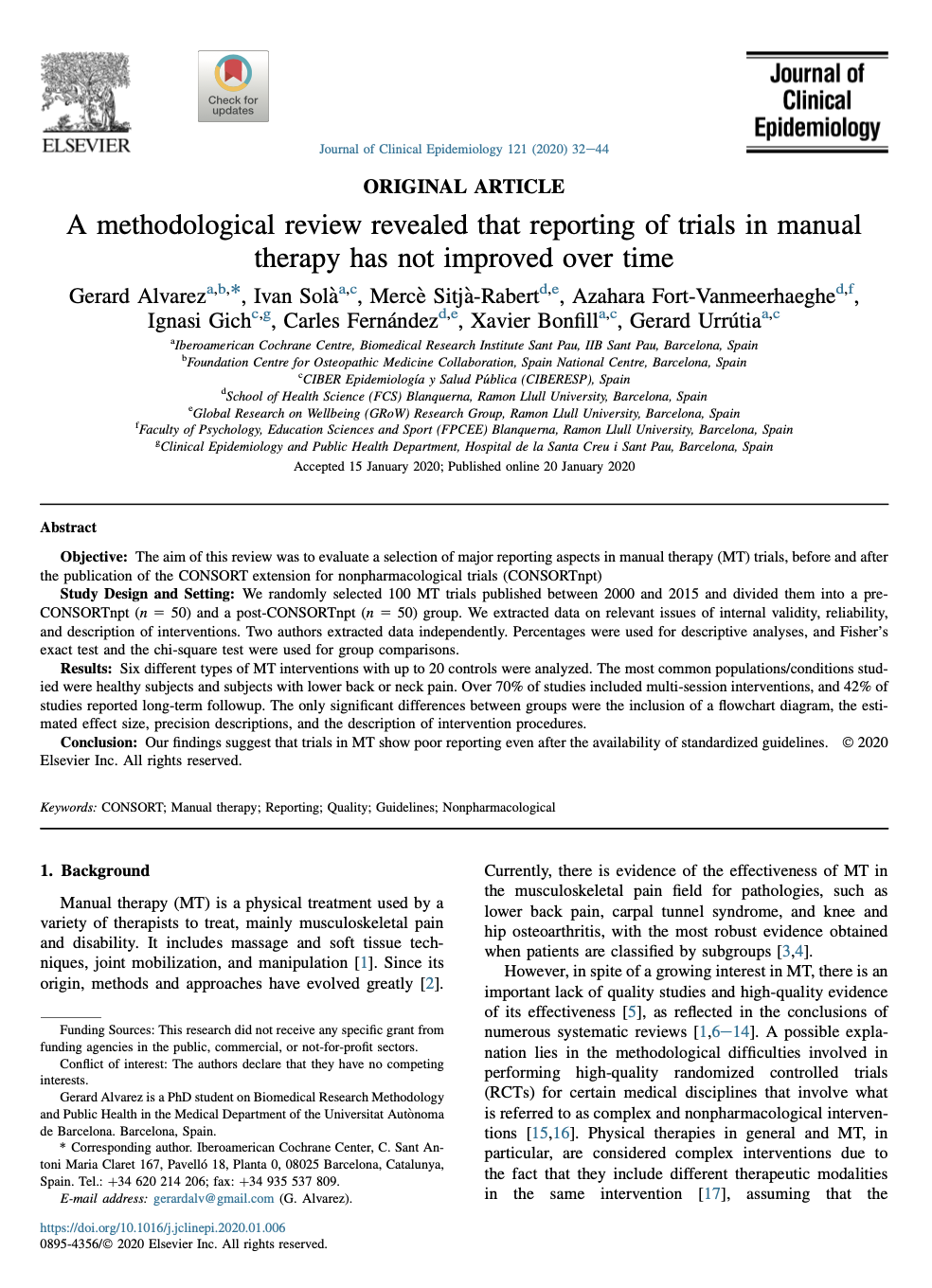 Profile of osteopathic practice in Spain: results from a standardized data collection study

ABSTRACT
There is limited research regarding patients’ profiles and consumer attitudes and habits of osteopathy in Spain. The purpose of this study was to profile patients who regularly receive osteopathic care in Spain using an internationally developed standardized data collection tool. Method: During the period between April 2014 and December 2015, a UK-developed standardized data collection tool was distributed to Spanish osteopaths who voluntarily agreed to participate in this cross-sectional study. Result: Thirty-six osteopaths participated in this study and returned a total of 314 completed datasets. Of 314 patients, 61% were women and 39% were men, with a mean age of 40 years (SD 17.02 years, range 0 to 83 years). Forty-four percent were full-time salaried workers, and in 78% of cases, receiving osteopathic treatment was the patient’s own choice. Chronic spinal pain presentations were the most frequent reasons for consultation. Seventy-five percent of patients presented with a coexisting condition, mainly gastrointestinal disorders and headaches. The main treatment approach consisted of mobilization techniques, followed by soft tissue, cranial and high velocity thrust techniques. Improvement or resolution of the complaint was experienced by 93% of patients after a small number of sessions. Adverse events were minor and occurred in 7% of all cases. Conclusion: This is the first study carried out in Spain analyzing the profile of patients who receive osteopathic care. The typical patient who receives osteopathic care in Spain is middle-aged, presents mainly with chronic spinal pain, and voluntarily seeks osteopathic treatment. Osteopathic treatment produces a significant improvement in the majority of cases with a low rate of minor adverse events reported. 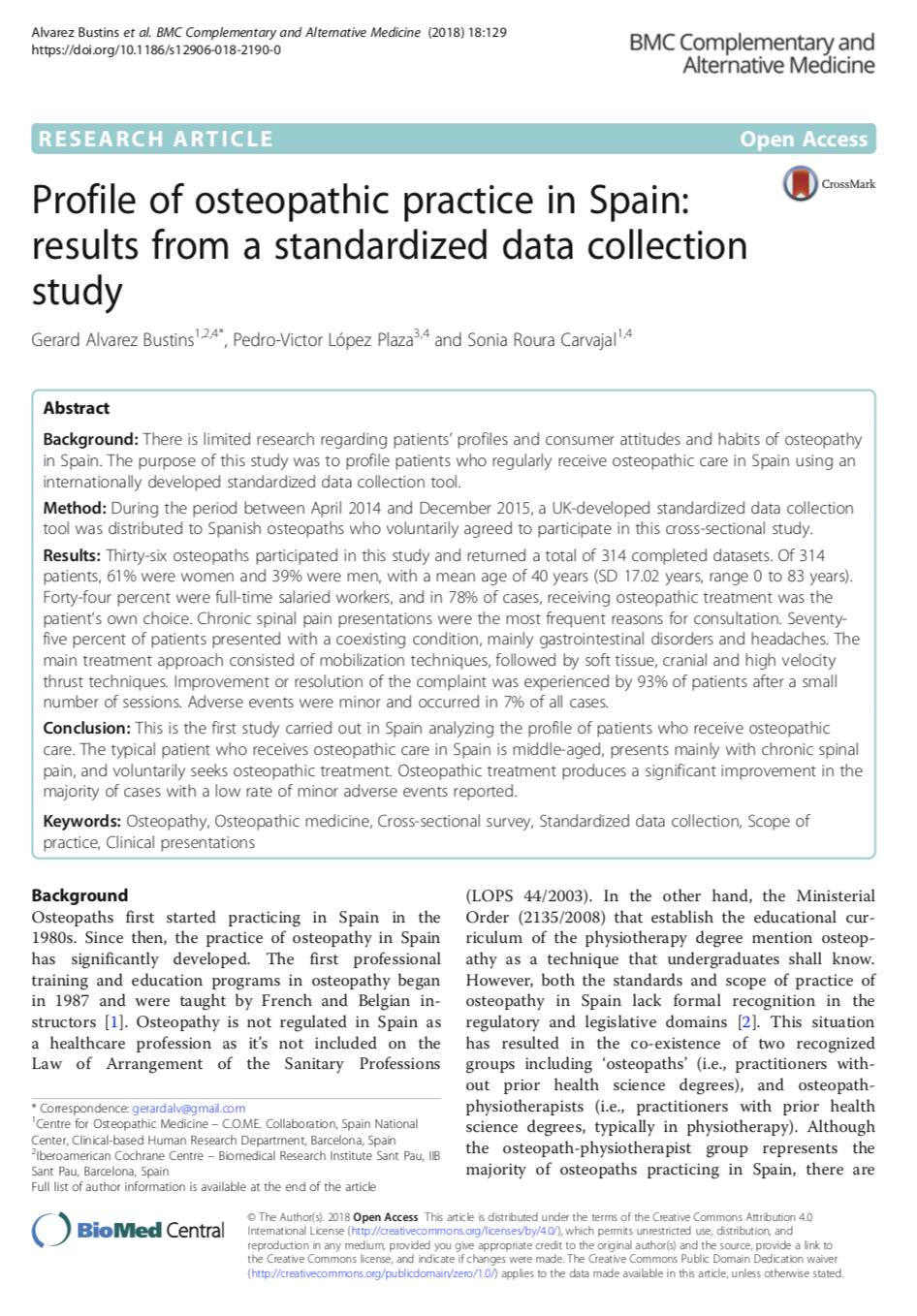 Using the template for intervention description and replication (TIDieR) as a tool for improving the design and reporting of manual therapy interventions.

ABSTRACT
The detailed reporting of any research intervention is crucial to evaluate its applicability into a routinely practice-based context. However, it has been estimated that, especially in non-pharmacological interventions, the published literature typically includes incomplete intervention details. In the field of manual medicine, where interventions are delivered with a high degree of individualization and variability, poorly reported studies could compromise internal and external validity of the results. Among the various initiatives that have been undertaken to improve the intervention description, the Template for Intervention Description and Replication (TIDieR) has to be highlighted as the most promising. TID ie R offers both to researchers and clinicians helpful and comprehensive guidance on how manual therapy interventions have to be designed and reported, taking into account the clinical complexity of manual therapy and the need to satisfy research gold standards. 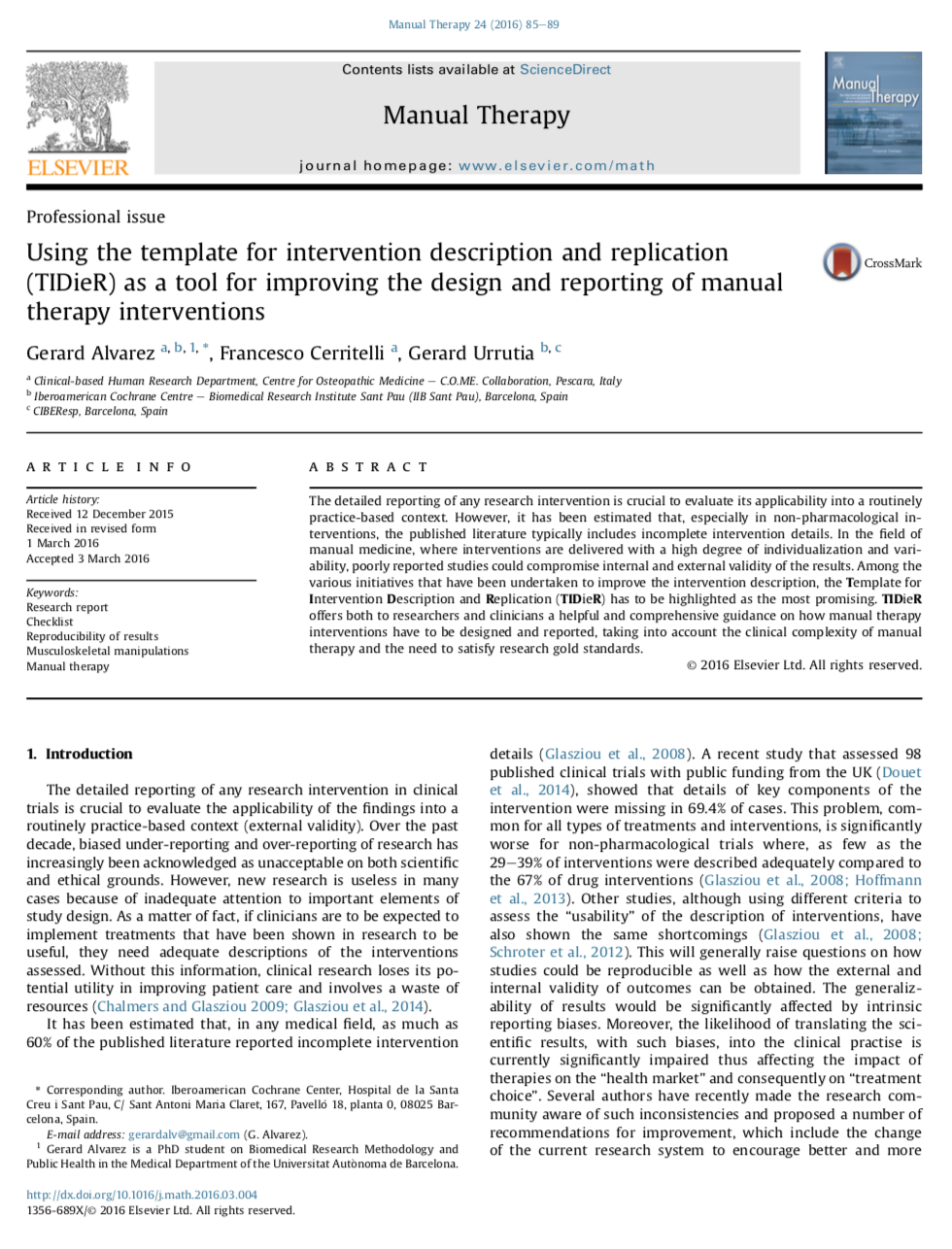 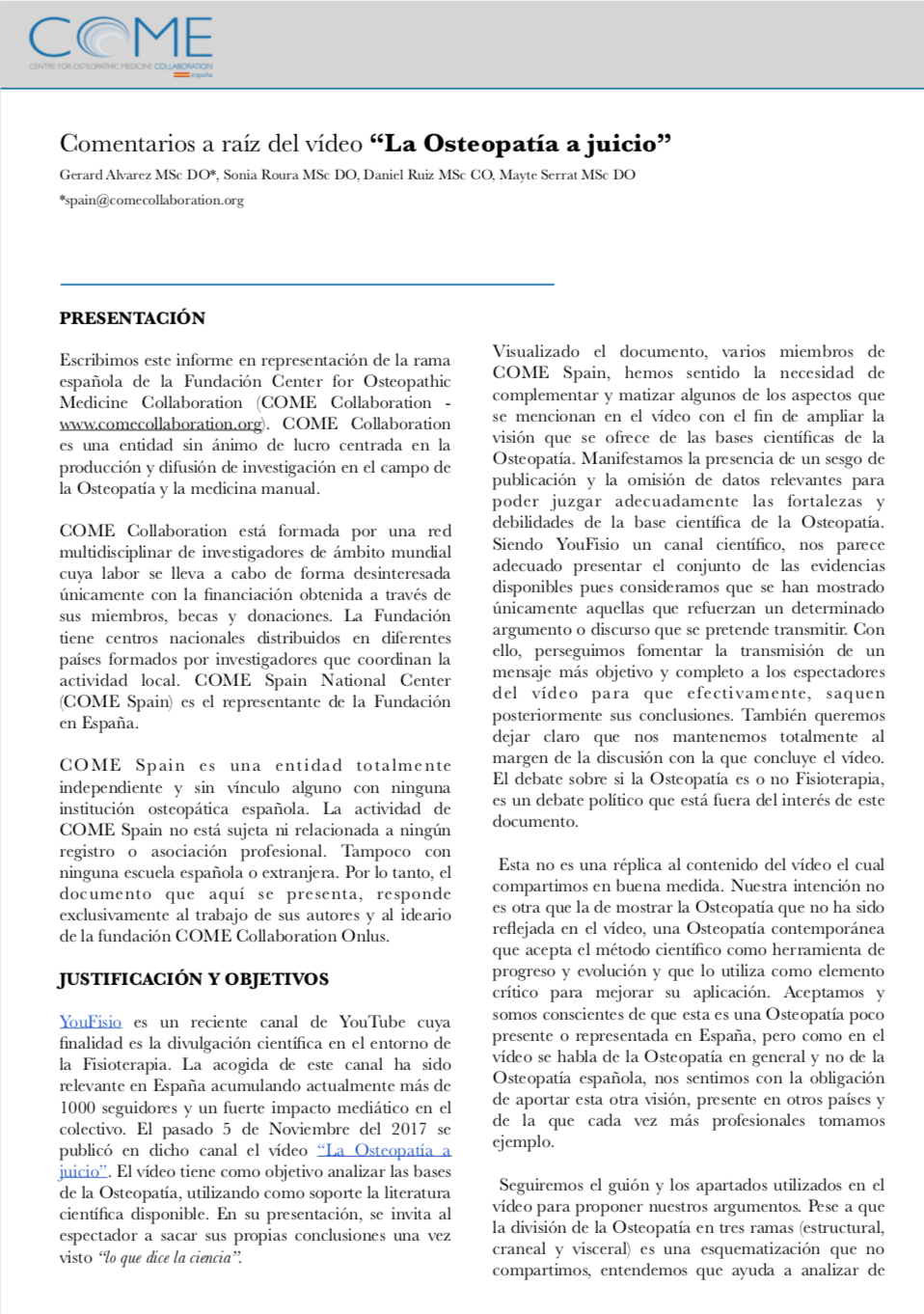